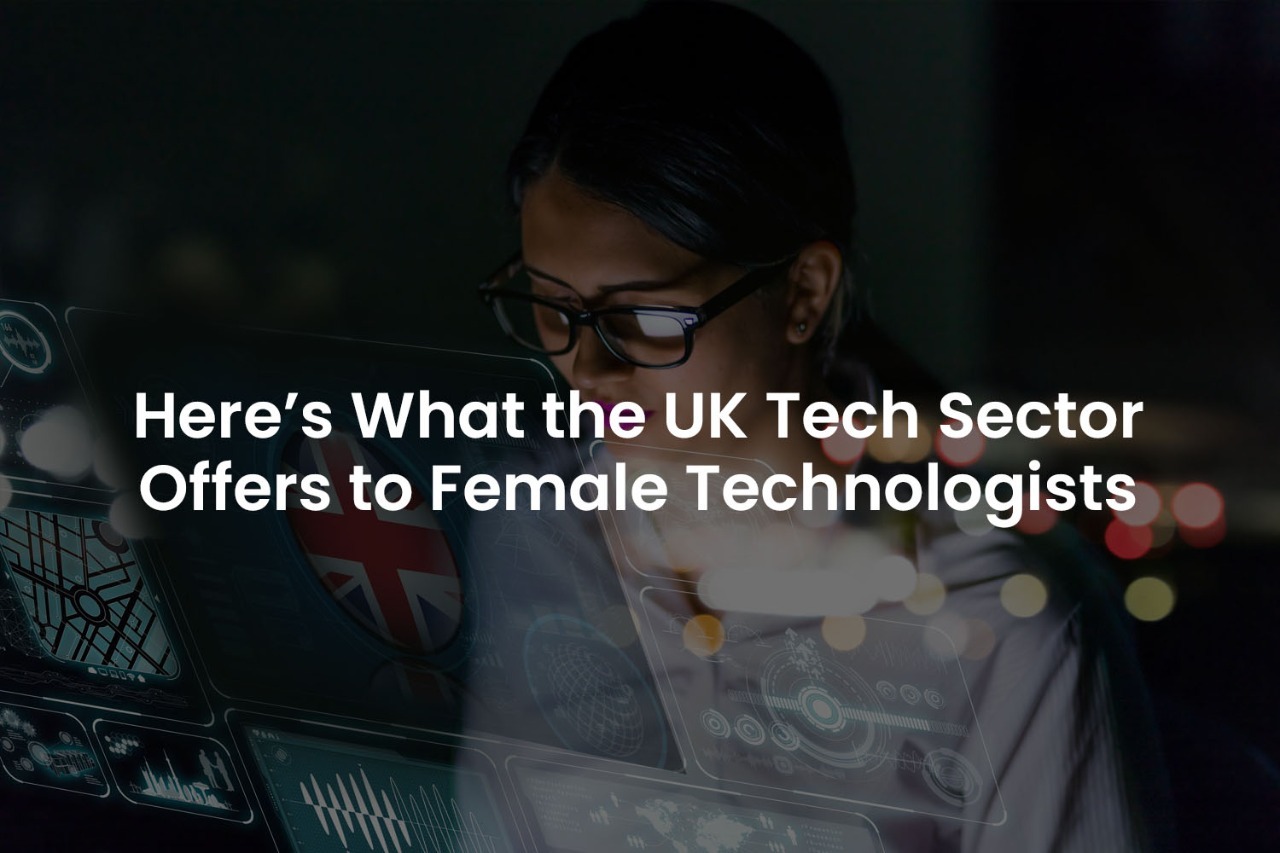 At the end of 2020, a year marked by COVID-19, Brexit, and economic instability, the UK's top priority for supporting its economy has shifted to technology and innovation. However, tech talent crisis combined with increased global competition forced the nation to implement strategies that will enable the UK to unlock the untapped potential of female tech talent. This led to an ambitious objective of making the UK a global innovation hub, by creating disruptive technologies, breakthrough innovations and the world's top tech-centric industries. Now the UK government is taking all actionable steps to address gender parity in the workplace as talent, customers, and stakeholders' expectations rise. Let us take a closer look at why it is beneficial for women to join the UK tech sector.

The United Kingdom is a multicultural and multilingual nation, and people from different nationalities have chosen to make the UK their home. Companies in the United Kingdom have fair practices that allow diverse individuals to collaborate efficiently. They provide an inclusive work environment where everyone feels welcome without feeling obligated to conform. Regardless of gender, background, identity, or situations, only their contribution and performance matter. The nation ensures that it taps into everyone's abilities and that everyone who can work is given a real opportunity to build a better Britain. The government collaborates with businesses to solve the significant barriers to workplace equality, including fair labour market access, a more flexible and inclusive labour market, and equitable compensation and advancement opportunities.

The UK is the third-largest digital economy globally and London serving as a worldwide hub for fintech innovation. Its dominance isn't limited to London; other British cities such as Manchester, Bristol and Cambridge are now among Europe's top 20 IT investment destinations. Technology and innovation have a long history in the United Kingdom, with enormous venture capital invested in UK technological firms. UK's investment in technology R&D established a significant potential for global talent acquisition, allowing the UK to dominate the market and maintain its position as a worldwide leader by employing top tech workers.

The British transportation system is one of the most advanced globally according to the Travel & Tourism Competitiveness Report, World Economic Forum. Whether you live in an urban area or the countryside, it is easy to travel by bus, tube and train. The UK is the home to largest air transport system in the Europe with over 70 airports. Its rail network ranked among the top five in the EU, and it is conveniently located for travel to key markets in Europe and North America.

Women who are new moms in the United Kingdom are entitled to statutory maternity leave, shared parental pay, child benefits, tax benefits and free health care. Moreover, companies are more focused to ensure work-life balance and allowing them to work from home or even take career breaks.

As an employee in the UK workplace, you are protected from any form of discrimination and sexual as well as mental harassment. According to the Equality Act 2010, harassment in the workplace is "unwanted conduct related to a relevant protected characteristic that has the purpose or effect of violating an individual's dignity or creating an intimidating, hostile, degrading, humiliating, or offensive environment for that individual,". Furthermore, Individuals are protected against harassment while seeking jobs, while working, and in some cases, after the working relationship has ended, such as while providing a verbal or written reference.

At a scale large enough to make a difference, the UK's largest cities, such as London, Manchester, Edinburgh, and Bristol, are genuinely narrowing the gender gap in technology, creating and supporting equality in the industry, and inspiring a future of diversity and inclusion.

London boasts more software developers than New York and San Francisco, demonstrating plenty of opportunities for new tech talent. The average compensation for a software developer in London is between 46 and 74 thousand pounds.

Manchester is attractive for women in tech since it is frequently chosen as the site of prominent women in tech career fairs, conferences, and meetups throughout the year, such as the We Are Tech Women conference.

Bristol, according to recent figures, the city employs approximately 275,000 people in tech jobs. Women comprise 20% of tech professionals in Bristol, which is 1% higher than the national average for women in IT employment.

Cambridge average tech wage is £46,730, and with living costs that are cheaper than London — a neighbouring neighbour – it's becoming a favourite destination for tech professionals. Cambridge is an excellent place to relocate to if you're interested in a career in data science, artificial intelligence, or robotics.

Many additional UK cities, including Edinburgh, Newcastle, Oxford, Reading, Birmingham, Brighton, Bath, and others, have emerged as pioneering innovation centres where women can benefit from abundant job opportunities.

The future of women in UK IT

While the current statistics of women representation aren’t optimistic, there has been a continual stream of effort to increase the awareness and gender balance in the technology sector. Here’s why TC is confident of a great future for women in the UK IT sector:

Massive job creation for women in IT: According to the Office for National Statistics (ONS), between July and September 2021, 58,000 jobs in the technology and communication sector were generated, with 41,000 (71%) of the professionals hired being women. Further in the report, technology was the third most popular industry for women in employment creation, and it is also the third fastest-growing sector in the UK overall.

Good prospects for career development: More than half of women between the ages of 18 and 39 who responded to a survey of 1,500 women working in technology said they had strong possibilities to grow their careers. Raghu Kerakatty, Co-Founder & CEO at Toutche, while with an interview with TC shared his confidence in the affirmative action that is in place. For example, companies are now very consciously looking to address gender disparity; there is an active movement to increase women’s representation in various companies. New roles are emerging, and robust matrixes are in place to drive the number of women higher. So, there is no better time for women to be a part of the UK’s tech sector.

Changing corporate mindset: UK companies are committed to creating a viable future for women. As Susana Ponce Froment, Head of Financial & Credit Risk at Tide, suggests, the technology sector, in particular, has increased the job opportunities given the growing demand for resources with digital and data management expertise. Given the shortage of this type of talent, companies have been considering expanding their talent pool to fill the job openings with qualified employees.

Increased salary trends: According to the Hays Salary & Recruiting Trends 2022 report, salaries in the UK climbed by 2.8 per cent, up from 1.2 per cent the previous year. Moreover,  61 per cent of businesses plan to raise compensation in the coming year with double-digit income growth for professionals in technology and engineering.

Although the UK still have a long way to go in terms of achieving true workplace equality in order to improve female employment, it is vital to consider how far it has progressed in the last two decades.