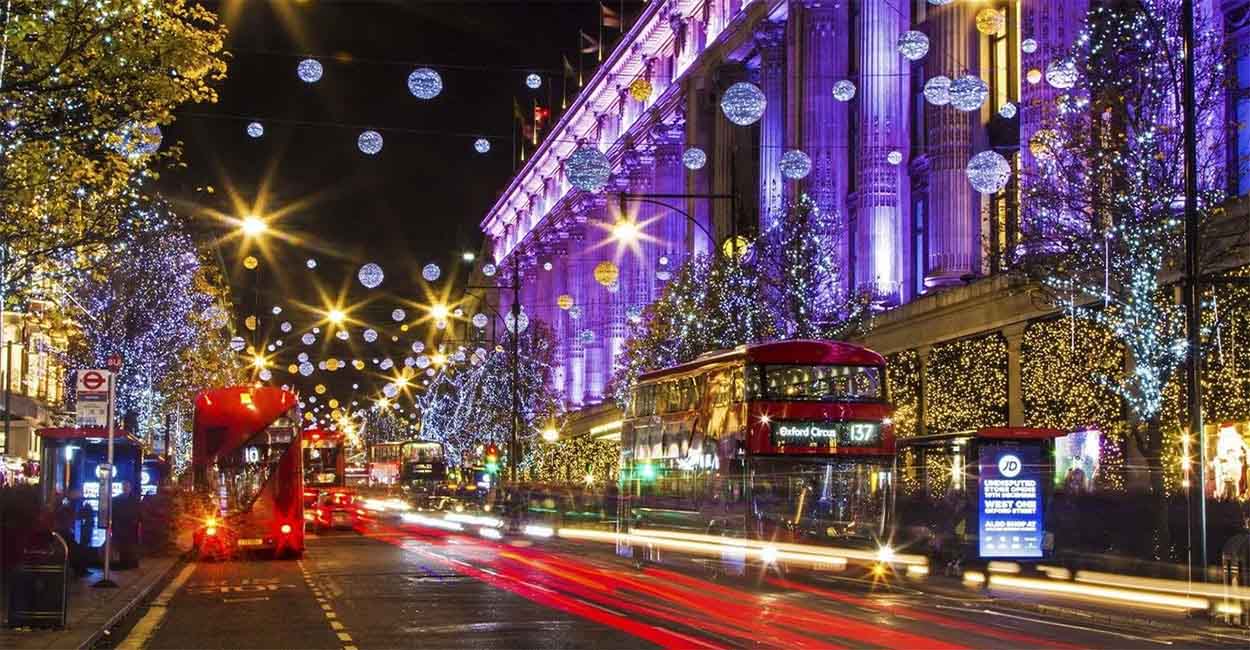 As and when December knocks the door, every UK town switch on the festive lights and houses decorate with Christmas wreaths hang on the wall, lights and Christmas tree with presents

Christmas in Britain is the biggest festive season of the year. It is well known that Brits do Christmas better than other countries worldwide. Britain has no national holiday, Bastille Day, or Independence Day; instead, they have Christmas day. This day is celebrated hugely with family and friends. Works shut down; for example, Cities like London completely close public transportation services on Christmas Day. In other western countries, while Halloween, Thanksgiving, and New Year's are celebrated equally in a grand manner, Brits go all the extra mile to celebrate Christmas; it's extraordinary for British people.

The essential Christmas holidays are four days, including December 25, Christmas day and December 26, Boxing Day. However, as workplaces shut down temporarily between Christmas and New Year, many people go for their annual holidays (a minimum of 28 days paid holiday).

So how do Brits celebrate their Christmas?

British TV channels broadcast Christmas special TV programs, whether it's EastEnders, Downton Abbey, or repeats of the Royle Family. This is also the day when the Queen's speech is broadcast at 3 pm on TV, Radio and online media. The Christmas Broadcast is an integral part of Christmas Day festivities for many British people. "Each Broadcast carefully reflects current issues and concerns and shares the Queen's reflections on what Christmas means to her and many of her listeners. Over the years, the Christmas Broadcast has acted as a chronicle of global, national and personal events which have affected The Queen and her audience." According to the royal website.

As scientists say, putting up Christmas decorations makes people happier. In line with that belief, some Brits start their Christmas celebration much earlier. When December knocks at the door, every UK town switches on the festive lights and houses decorated with Christmas wreaths hang on the wall, lights and Christmas trees with presents. The Christmas Tree is one of the most symbolic images of the holiday season, however as per British superstition, trees and decorations should be taken down within Twelfth Night (12 days after Christmas) to avoid bad luck.

Apart from lights, wreaths, trees and decorations, food is an essential part of the Christmas celebration in the UK. Foods and drinks such as Turkey, Mince pies, Pigs in blankets, Christmas pudding, and Mulled Wine have been serving to connect and deepen communal relationships and sustain British shared identity. That being said, even workplaces in the UK grandly celebrate Christmas. It is vital that people, especially international employees, be well aware of work cultures around the festive season.

Office Christmas party is a British must in the festive season!

Companies consider Christmas as an opportunity to recognise their staff's contribution towards the company, and it is also believed that celebrating Christmas at workplaces significantly boosts employee engagement. The majority of UK businesses do that by hosting a Christmas party and gifting a Christmas hamper or a shopping voucher, or paying a bonus, according to CIPD.

Depending on the company, the Christmas party can take place during lunchtime and last till afternoon or evening, but in some cases, they might only take place during the evening. Usually, only employees are invited to such workplace parties, not their spouse or partner.

Usually, workplace Christmas parties concentrate on eating and drinking and celebrating the occasion. The dress code for parties will either be glam or fancy dress. Some office parties also recommend employees to wear their Christmas jumper for the evening party. Women in the office often flash their Christmas themed jewellery along with Father Christmas ( Santa Claus in the USA) hats and reindeer headbands which beautifully suits them. The Britishers prefer traditional food for Christmas parties at workplaces. The traditional British cuisine mainly includes roast turkey for dinner and Christmas pudding.

Drinking and dining are part and parcel of workplace Christmas culture in the UK. From turkey roast to Mulled Wine, everything graces the occasion vibrantly. The parties are more of dancing and karaoke. Most importantly, this Christmas party at the workplace is an informal way of a fantastic bonding experience, one of the only times where teams from different departments socialise with each other. From interns to business leaders, it's a time for everyone to relax and socialise.

However, UK Christmas office parties sometimes end up in legal battles as office parties are treated as an extension of work. Therefore, employees shouldn't forget that they are still at work. One shouldn't discuss pay increment matters with the manager or avoid discussing career prospects or remuneration with reports. Christmas parties may be the chance to informally bond with colleagues and managers, but any unwelcome gesture, office gossip or office 'banter' that could be considered offensive should be avoided at any cost. Lastly, even though drinks are free, one should drink as if they are still at work to avoid embarrassment or legal cases.